In the aircraft cabin interiors industry, sandwich panel long beam and short beam tests are commonly used to determine sandwich panel flexure (or bending) and core shear allowable stress values. These allowable stress values are influenced by whether the panel test coupon long axis is aligned with the core ribbon (‘L’) direction or the weaker core cell flats (‘W’) direction. To learn more about this concept, check out this post: Sandwich Panel Flexure and Core Shear. As a follow up, in this post we will study the test methods, the test set ups and other interesting details. The methods are discussed in a lot more detail in ASTM-C393 (core shear) and ASTM-D7249 (flexure) specification documents. Are you ready? I thought so. Let us dig in then…

The honeycomb sandwich panel flexure or bending allowable stress is calculated using ‘long beam’ bending tests. Various long beam test methods are used such as three point (two bottom side end supports and one top side middle loading point), four point (two bottom side end supports and two top side upper loading points) etc. The reason is that some methods are more suitable to inducing failure in certain panel types. In this section we will study the four point quarter span (non-standard) long beam test set up. Many different coupons are tested and finally A-Basis and B-Basis statistical values are calculated from the test results.

S = The total span of the supports [in a standard configuration this value would be 22.0″]

S/4 = The distance of the load points from the supports

L = Distance between the load points [in a standard configuration this value would be 4.0″]

From classical beam theory, the figure below illustrates the shear force and bending moment diagrams on this test coupon.

The load 'P' is increased on this test coupon until failure occurs. Assume this load is Pmax.

Typical failure mode is skin buckling failure on the top side near the middle of the coupon. From the maximum test load, the ultimate flexure or bending stress is calculated using the following formula:

The core shear test set up is similar to the long beam test set up. The difference is that the distance S is much smaller at about 6.0", which makes sense from a classical beam theory stand point. For short stubby beams, shear deflection is the most significant component as opposed to deflection due to bending for long beams. Typical failure mode is core crush failure under the load points. The core shear stress is calculated using the following formula:

Related to Sandwich Panel Long Beam and Short Beam Tests, here is a cool video that goes into the manufacturing process of composite sandwich panels: 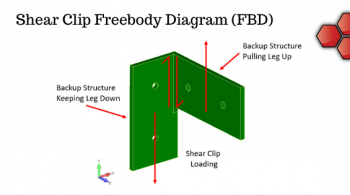 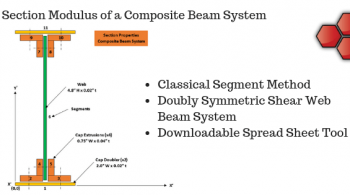